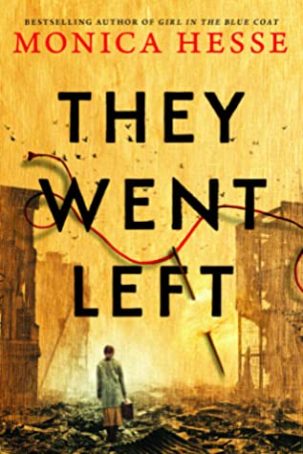 Synopsis: Germany, 1945. The soldiers who liberated the Gross-Rosen concentration camp said the war was over, but nothing feels over to eighteen-year-old Zofia Lederman. Her body has barely begun to heal; her mind feels broken. And her life is completely shattered: Three years ago, she and her younger brother, Abek, were the only members of their family to be sent to the right, away from the gas chambers of Auschwitz-Birkenau. Everyone else–her parents, her grandmother, radiant Aunt Maja–they went left.

Zofia’s last words to her brother were a promise: Abek to Zofia, A to Z. When I find you again, we will fill our alphabet. Now her journey to fulfill that vow takes her through Poland and Germany, and into a displaced persons camp where everyone she meets is trying to piece together a future from a painful past: Miriam, desperately searching for the twin she was separated from after they survived medical experimentation. Breine, a former heiress, who now longs only for a simple wedding with her new fiancé. And Josef, who guards his past behind a wall of secrets, and is beautiful and strange and magnetic all at once.

But the deeper Zofia digs, the more impossible her search seems. How can she find one boy in a sea of the missing? In the rubble of a broken continent, Zofia must delve into a mystery whose answers could break her–or help her rebuild her world.

Disclaimer: I received a free copy from the publishers in turn for a book review but all thoughts are my own

This book was just so well done, I enjoyed it much more than Hesse’s other book The Girl in the Blue Coat. I liked how this book takes place after World War II as most books set in that time period end with the war and liberation. The book starts with the main character Zofia getting released from a hospital in which she was staying in after her camp got liberated. From the moment she was released Zofia has had one mission, finding her brother.

This book was just so well done, Hesse’s writing style is beautiful. With most WWII books ending at liberation/end of the war it was interesting to see the aspect of what it is like for people after. Some characters are still dealing with a lot and still trying to recover while others are looking forward and finding happiness after such a horrible time.

Zofia is a bit of an unreliable character because her mind isn’t complete. The trauma she went through and witnessed during the war has affected her memory which isn’t surprising, the mind will block out horrible events as a way to cope. Zofia has holes in her memory from at the start of the war and also during it. So every memory she remembers the question is asked of is this a true memory or one made up?  Zofia is a strong character because after everything she has been through she is so determined to find her brother and do whatever it is she needs to, including traveling all the way to Germany where she believes her brother might be.

I think a message that this book carries is hope. Zofia never giving up hope on finding her brother even when some tell her it might not be possible. And the side characters we meet in this book, planning a trip to go and live in Israel, full of hope of living in their Promise Land. That after all they witnessed and survived that there is hope, and I do not know if this is something Hesse intended but it is something I took away from the book.

Overall I loved this book and I definitely think its one people should read. It tells the story of someone after the Holocaust and there are not many books out there that do that.

2 thoughts on “They Went Left|Book Review”