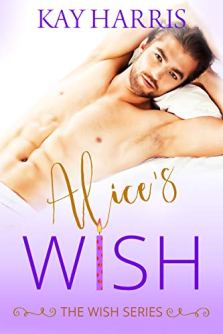 Synopsis: Being bullied by her high school boyfriend was a turning point for Alice Bando. She left the tiny town of Walker Springs for the bustling Bay Area and embraced the sexual identity that had led to nothing but pain as a teenager. But when the kind hero from that fateful night turns up at her job all the way across the country from their hometown, she has no choice but to confront her past.

Darius Fleck has had a thing for Alice since she dated his little brother over six years before. Now that they’re working together, he has a new chance to convince Alice he was the right one for her all along.

Climbing over the past to create a new future won’t be easy. But Alice and Darius just might be up for the challenge.

Disclaimer: I received an ARC of this book for review but all thoughts are my own

This book was quite an enjoyable read. It was nice, quick, and easy to read. This book is about Alice who left her hometown after a bullying incident. Now she lives in the Bay Area working at a candle company. Then enters Darius Fleck, the brother of her ex-boyfriend. Darius is a football player turned model/spokesperson after an injury. When the two of them meet, Alice is confronted by her past and Darius by his feelings for Alice. But with all thats between them will they be able to build a future together?

This book is also a book in a series but can be read as a stand alone.

One thing I surprisingly didn’t mind was the length. I was little apprehensive when I saw it was only 172 pages. I was worried we would’t get to know the characters well and along with the plot, they wouldn’t be fleshed out very well. The wasn’t completely true though. I felt that though there was only 172 pages, we got to know the characters pretty well. Sure, I wish there was more pages so we can dive even deeper into these characters, but the short amount of pages wasn’t very detrimental to it. Now the background characters I felt needed a little more work. There is a character in this book who is very important to our main character Alice. However I felt that I didn’t really know him as much as I felt I should of since he is important to the main character. He also felt pretty one dimensional along with some of the other background character. I think that if the book was longer, this could of been fixed. With the amount of pages there were, I felt it didn’t leave very much room for the understanding of the background characters because most of it was used for the main characters. Also, since this book is short, things felt rushed. From the relationship to things each character was dealing with, some things just felt a bit rushed.

So one thing that was pretty bothering for me was the change in P.O.V. This book had P.O.V changes in the middle of a chapter. Now this doesn’t really bother me. But what does bother me is when a book does this without saying. There was really not indication that it was changing and it was quite confusing a few times. I wish there was a little header saying who’s P.O.V. it changed to. Or, just change point of view every chapter. When it changes every chapter without indication for me, it is easier to tell. But no matter how the P.O.V. changed, I wish there was like an indication.

As I said up above, there is a character in this book that is really important to the main character. But if it wasn’t for the main character mentioning it a ton of times throughout the book, I would not have known. There is little interaction between these characters that show how close they actually are. I was pretty bummed that there isn’t much scenes between them showing their interaction. It felt more of a say than show sort of thing and I definitely felt it should of been a show thing. Just the fact that the main character says it so often does not really give me the knowledge I guess of how close they are. When we see relationships between characters, thats when I feel like we really understand that relationship, not just from what the character says. And this was the case for me involving this friendship. It just would of been a whole lot nicer to see how this friend is important to Alice rather than just hear it.

So because this book is pretty short, the relationship felt pretty undeveloped. That being said I did enjoy it. I felt the two characters were cute together and went well together. It was enjoyable to read about and watch each character overcome their own obstacles. For what the length of this book was, the relationship was not to badly developed. Yes, if the book was longer this relationship could of been much more developed and better. But for what the length was, it was alright . The relationship development was okay. It felt kind of instant lovely but also not really if that makes sense.

Overall I enjoyed this book. It was a nice cute book and the relationship was pretty enjoyable. I would definitely maybe read other books by this author if I came across them.